Canadian Solar Inc. CSIQ recently clinched three solar photovoltaic (PV) projects in Brazil's A-4 auction. The auction, held on April 4, 2018, made Canadian Solar the only company to successfully win projects in all of the five Federal Auctions held in Brazil, to date.Details of the DealThe three solar PV projects totaling 364 megawatts-peak (MWp) are located in the states of Minas Gerais and Ceara. Under 20-year Power Purchase Agreements, these projects are valued at approximately average price of $35.58 per megawatt hour (MWh).The solar power plants are approximately expected to generate 706,056 MWh of electricity every year. Canadian Solar plans to construct these plants and start their commercial operations by 2022.Solar Power Prospects in BrazilBrazil is currently one of the fastest growing solar markets in the world, attracting the interest of a number of foreign investors, multilateral development banks, energy companies and equipment manufacturers. As per the Association of Photovoltaic Solar Energy (Absolar), Brazil has already surpassed 1 GW of installed solar capacity, as of January 2018.Moreover, per a report BNDES (Brazilian Development Bank) expects to invest $2.5 billion in solar development through 2018. By 2024, Brazil forecasts that it could bring up to 7 GW of solar generation capacity online. Solar investments in Brazil is projected to reach $25 billion by 2030, thereby offering immense growth opportunities for solar module manufacturers like Canadian Solar.Interestingly, consistent innovations and cost-reduction efforts have enabled Canadian Solar to deliver 55.5% reduction in energy prices from the first auction. This in turn is expected to boost the company’s footprint in Brazil — a nation that has established itself as Latin America’s biggest renewable energy market.Global FootprintThe outlook for the renewable energy industry has improved manifold lately as utilities and corporations are increasingly shifting to renewables owing to declining costs of solar and wind technologies, and rising demand for more carbon-constrained practices. Evidently, renewable energy sources are set to represent almost three quarters of the $10.2 trillion the world will invest in new power generating technology by 2040 (according to Bloomberg New Energy Outlook).Now, solar energy being a key area in the renewable energy space, demand for solar power generated electricity has boomed significantly in past few years. Per a report by International Renewable Energy Agency, solar PV modules prices had dropped more than 80% in 2017 from 2009. The cost of electricity from solar PV fell almost three-quarters in 2010-2017 and continues to decline. The global transformation toward carbon-constrained future, countries worldwide will increase their electricity generation capacity from solar energy.Per a report by Allied Market Research, the global solar energy industry is expected to reach $422 billion by 2022, growing at a CAGR of 24.2% from 2016 to 2022. Naturally to exploit the growth opportunities of the global solar market, Canadian Solar has been expanding its footprint worldwide.In this line, last Month, Canadian Solar acquired a 97.6 MWp solar photovoltaic PV project in Cafayate, Salta Province, Argentina. Once connected to the grid, the plant will generate approximately 235,777 MWh of electricity per year.In the same month, the company’s subsidiary Recurrent Energy completed sale of its interests in three solar photovoltaic projects totaling 235 megawatts to The Korea Electric Power Corporation. The buyout enabled Canadian Solar in generating revenue from the projects sold to KEPCO.Moreover, Canadian Solar commissioned its first solar power project in Africa by starting a commercial operation of a 6 MWp solar PV power project in Keetmanshoop, Namibia.Notably, Canadian Solar looks forward to expand its global presence as it’s has been witnessing increasing demand from new markets, such as Middle East, Australia and Latin America.Price MovementShares of Canadian Solar have rallied 26.1% year to date, underperforming the industry’s gain of 72.1%. The underperformance may have been caused by stiff competition from cheaper alternatives like natural gas, given the current shale boom in the United States. 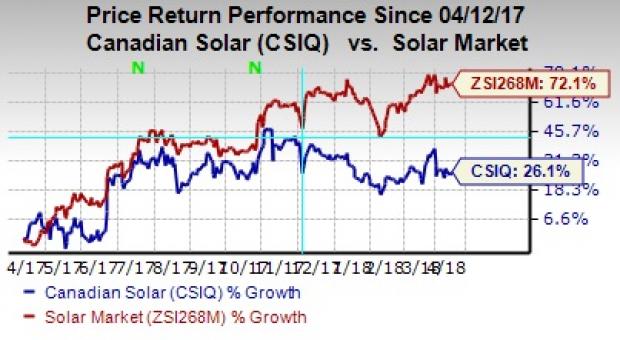